Where: On the interwebz

Opening Keynote - The Future of Programming

“Erlang is actually a Domain-Specific-Language written in C, tell your managers that and they’ll buy that”

JVM for speed and parallelism.

BEAM for scalability and concurrency.

The predecessor of the BEAM was the JAM: Joe’s Abstract Machine!

Looking at the future

Distribution: no worries about threads breaking, corrupting your memory, introduces latency, but is pretty fast at the end of the day.

The future is distributed.

The BEAM can be seen as an OS with a hypervisor on top of your OS. 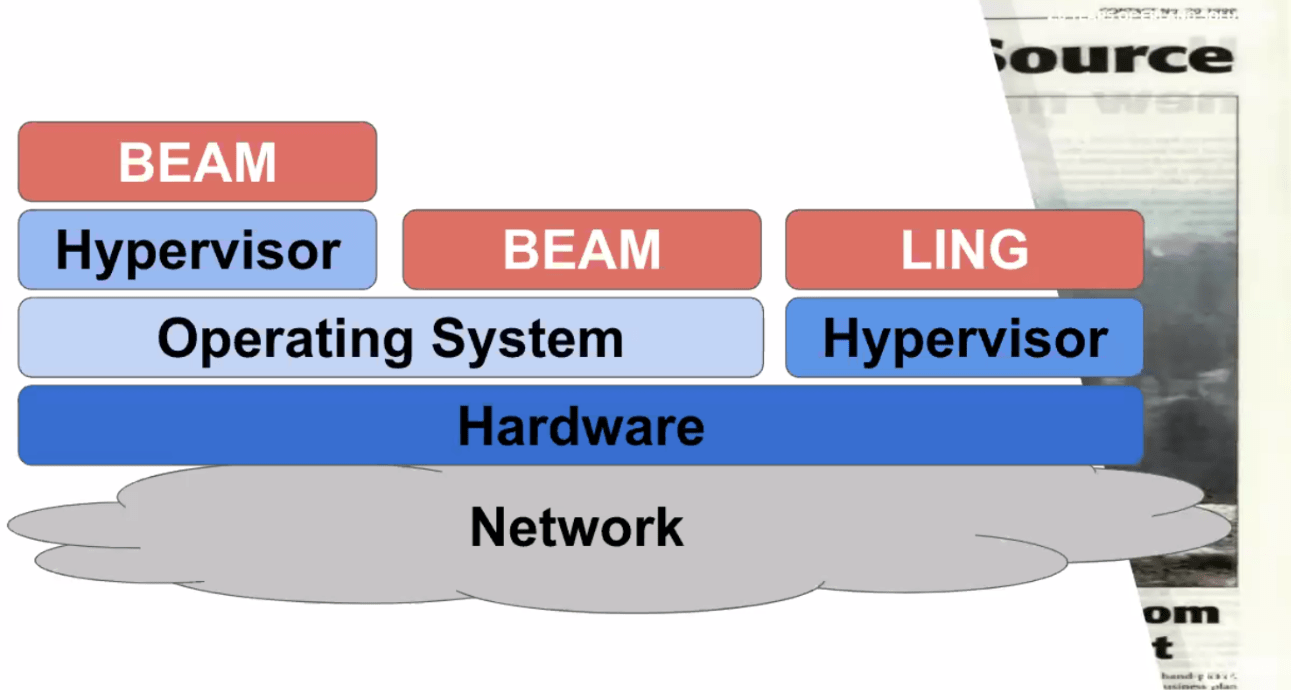 The BEAM has always been “cloud-native”, not relying on particular OS or distribution.

Letting you Focus on business logic. 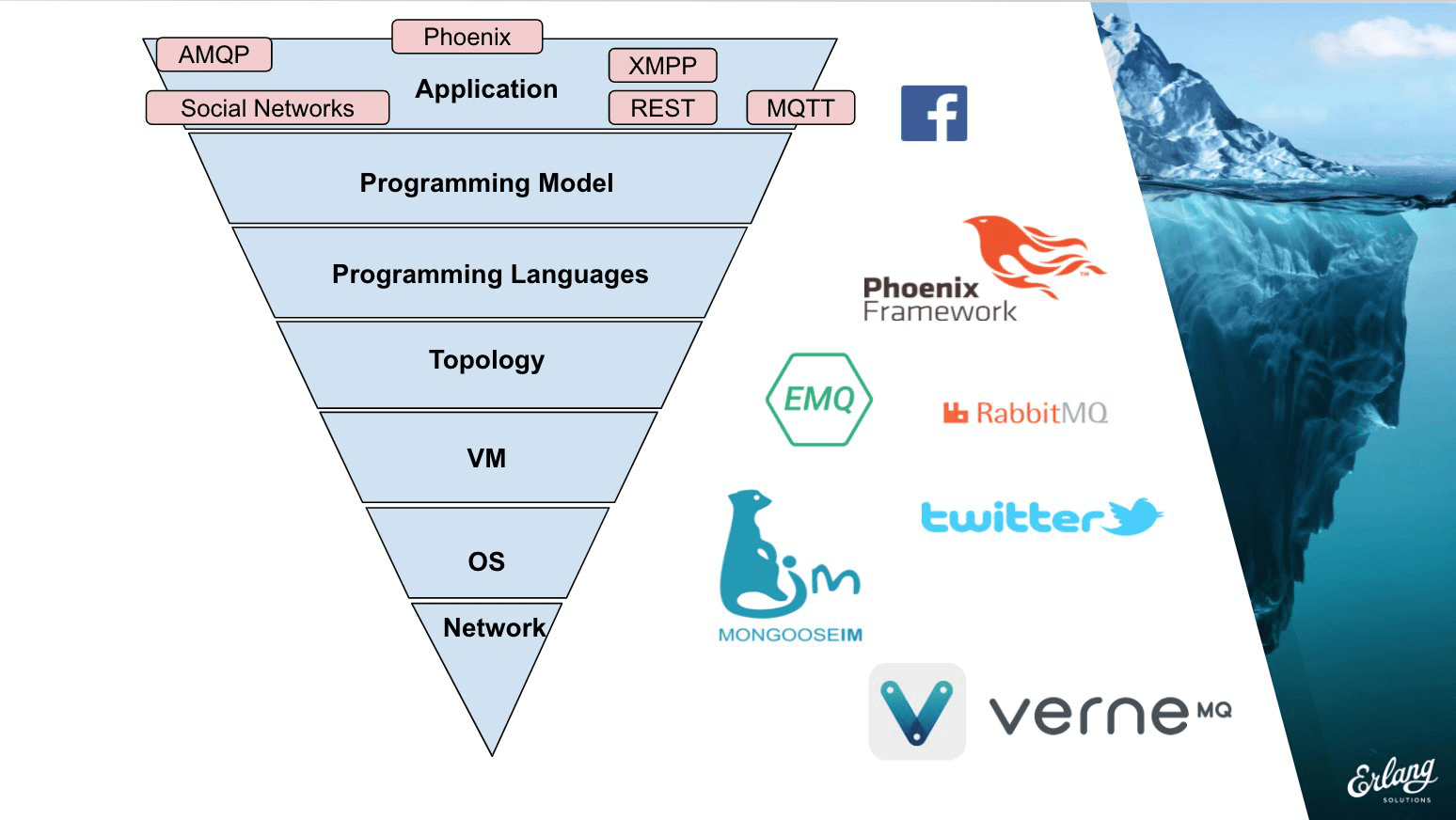 You should be able to focus mostly just on the business side of programming, the actual business logic.

Erlang/Elixir helps you with that by e.g. using a gen-server and implementing just call or cast calls, without spending time on the underlying complexity.

OTP will let you scale both vertically and horizontally, with a simple programming model. 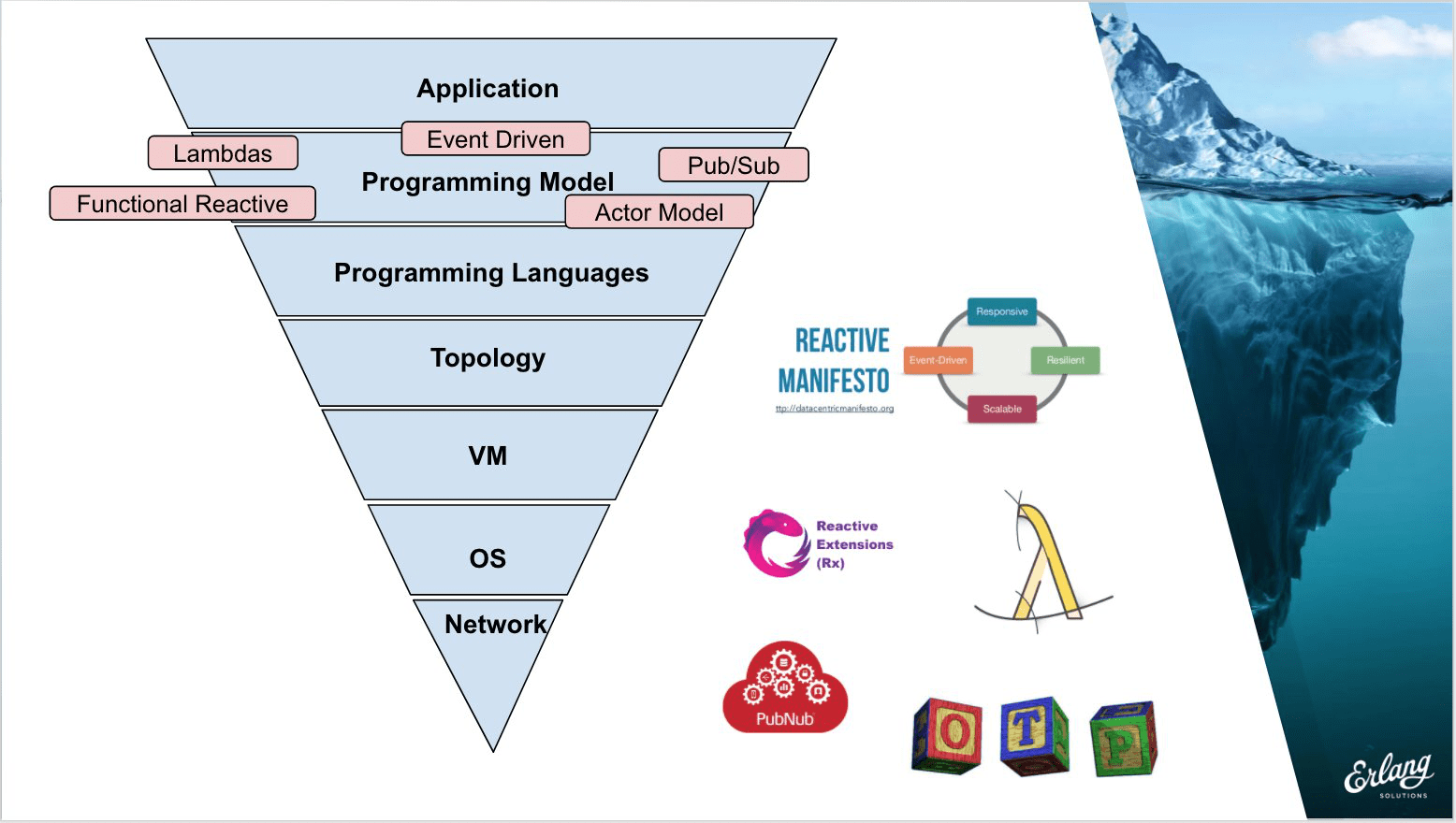 Hopefully in the future, we won’t be talking about Kubernetes, Lambdas, Docker-compose and abstract away the infrastructure.

If you don’t have the correct abstractions in place, you are going to have problems evolving with time.

If you don’t have a tool that is abstracted away on layer 7, let it be. 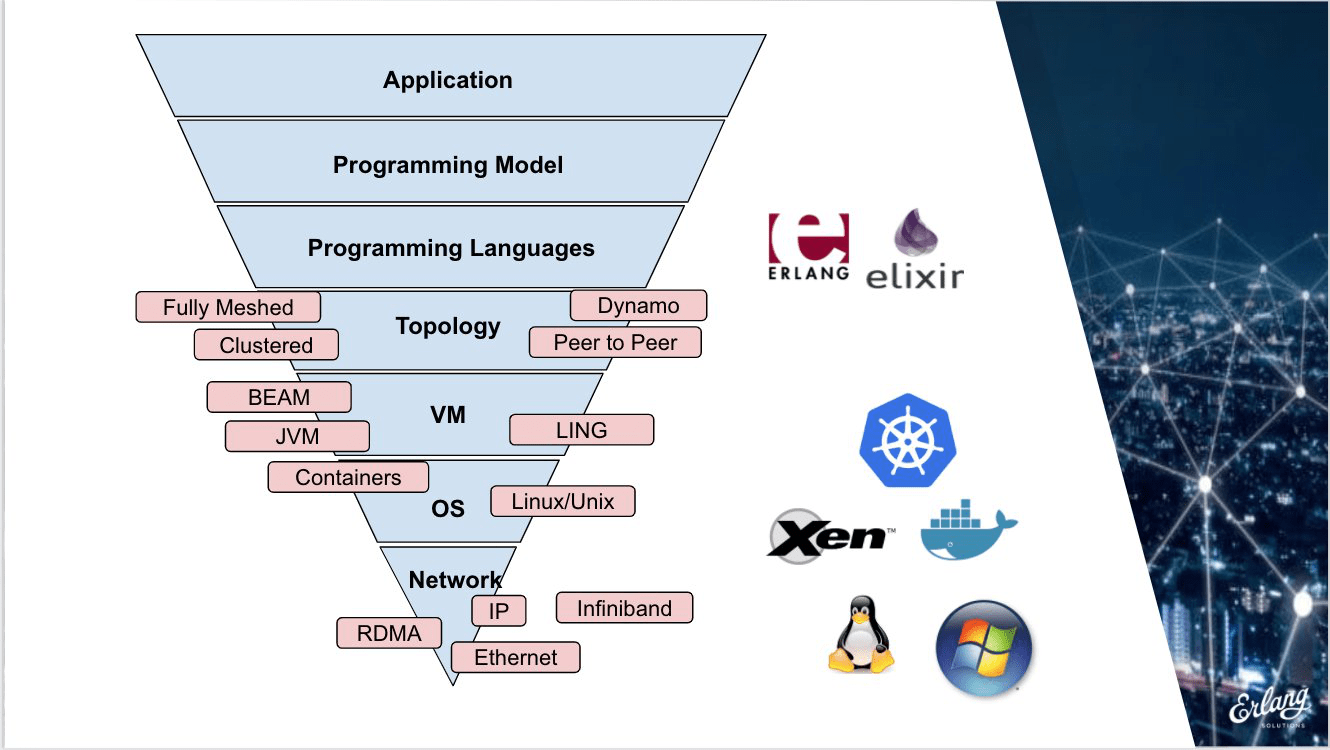 “The future is concurrent, distributed and properly abstracted!”

Request spikes happen. Overloads can be nightmares. Latencies are introduced.

This can happen for both internal and external services, DB, APIs, etc.

“All services have objectives”. For example requests/second

A resilient service should be able to withstand a 10x traffic spike and continue to meet those objectives.

Most systems boil down to queues.

It contains work that needs to be processed.

CPU pressure happens when too many BEAM processes are created, and not processed in time to empty the queue.

This slow down the queue and scheduler of the BEAM and things can fall apart.

You need to get Arrival Rate and Processing Time under control.

It would be obvious to start dropping items from the queue.

The server that processes the queue items could drop requests, or queue items themself and eventually evict items. (Downstream solution)

You could also stop sending requests all together to the downstream server (Upstream solution). Mitigated the load on the downstream.

Autoscaling is not a silver bullet.

If you DB is under load, and you auto-scale your server, you just made things worse.

You need to keep in mind the Load shedding into the equation.

If a server is under load, you can shut off the traffic to that server and let it “heal”.

Circuit breakers are your last line of defense.

Circuit breakers should be dynamic and adapted your domain. You cannot have a static circuit breaker in a dynamic domain of yours.

Resilient to failures, a self-healing internet and systems.

Dynamically discover Adaptive limits by probing your system and seeing the actual limit of services.

You backoff much faster than you grow.

Tools and ideas: fuse and regulator (on github).

Backpressure can work great for internal services, but for e.g. spike in users your system needs to dynamically adapt to the circumstances.

It’s easy to pick up a book, read the theories, but often get stuck in the more practical stuff.

Similar concerns as with docker.

You will get throttled if you reach certain CPU limits.

Slimmed down and sped up, simplified configurations.

Less cool: speed is terrible, useability is often quite bad.

This because useability comes to the cost of given trust to a certain authority.

You pass tokens back and forth until the contract is concluded. It could take 10 minutes or 6 months.

Your smart contract is the “protocol” you’re defining. Deploy the contract in the state channel.

This because Elixir fully integrates with Erlang’s new logger, everything is shared.

Compilation in Elixir is the same as execution code.

This is because you can conditionally define functions and modules.

This is where compilation tracers come into play. Receive a bunch of events (compile module, define functions, etc.).

Important foundation for the language.

Application environment is read at compile time, not at run time.

You can now use Application.compile_env to read variables at compile time.

If you’re interested in just a few fields of a struct, now Eixir gives you more readable traces.

Warnings if using modules from non-dependencies.

Comes with every new phoenix application (v1.5 and up).

Closing Keynote - The Tyranny of Structurlessness

People want more and more from applications as times goes on!

-> Complexity grows at an exponentional rate.

-> more flexible and easier to scale

Let’s focus on domain and structure!

Another leayer between the outer layer and functional core: Semantic DSL / OO

Brings to higher reuse of code.

Each step is very simple in an actor-based application.

Reasoning about dynamic organisms is difficult.

Composition is at the heart of modularity

Orthogonality is at the heart of composition 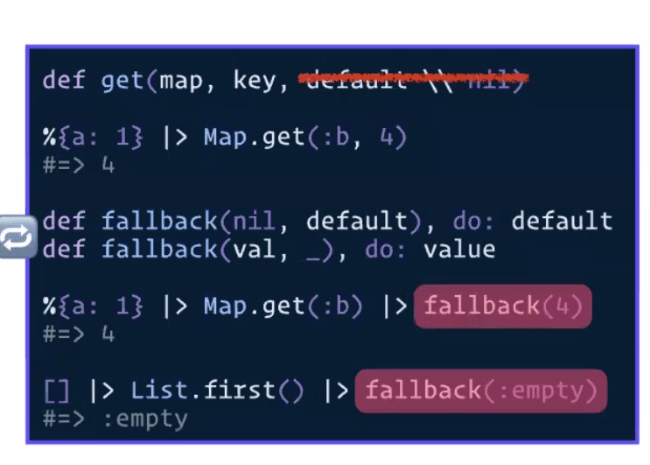 no reinventing the wheel

GenServers etc are pretty low level! Add semantics to them!

So instead of adding a third parameter to every function that implements the Enumerable protocol, you can abstract that semantic away!

Define front-end and back-end interfaces well (could be sync and async!)

Add a semantic layer to your application code, based on your domain

Test your distributed system by looking at the properties

How can we improve the programming of Telephone applications? Very complex to build and maintain.

These are not problems just for telecom!

Erlang tested in Ericsson in project ACS/Dunder. The first users of Erlang in a real product

Doing lots of experiments and testing in the real world.

Language/system should be simple, with a high level language to get real benefits.

“Build for the future”, so that your solutions don’t bring to new problems, but the other way around.

Try to think of the problems you’re not solving.

Think about the Actual problems, problems of purpose.

Problem Discovery! In Erlang they ahd the problems of the platform, because to test the platform in real live you need a real life problem and application. Kinda chicken-and-egg problem.

Software is never really finished. If you touch it, it’s gonna mold, change and adapt.

How the BEAM will change your mind

Like when in functional programming world you say, “you need to change your mind”.

On an abstract level FP advocates sound fine, but getting more practical and approaching it is a different thing.

You see all data, you have control over all of it, you know it all (algorithm).

Small buckets of data, the bucket know about themselves.

The buckets don’t know about each other. They can be seen as minions that do small tasks on their own data.

A master is still needed to orchestrate all together.

Each process has their own duties, can go bad but the world needs to go on. The processes can be supervised and monitored.

Eventually all characters work together and a result, a stable situation is reached.

Could have gone with imperative approach.

BEAM and Erlang created to support multiple phone calls at once, failsafe system and perform a great number of tasks at the same time.

Each thread / process handles a single unit, and can be sequential.

“It is difficult to write a web server to handle 2 million session. But it’s easy to write 1 server, and replicate it 2 million times” - Joe

No shared state between process, but instead communicates by sending messages between each other.

Distributed computing features built into the BEAM, process can send messages between each other between the same computer or a cluster of computers.

If something goes wrong, the error is contained in the smallest possible sub-system: an erlang process.

In this sense, BEAM is similar to Kubernetes, although no shared state and more granular when it comes to fail-over.

They operate at a different level of abstraction.

Languages on the BEAM: Erlang, Elixir, Gleam and others.

The BEAM gives us a the tools to tolerate mistakes, e.g. Bugs in production!

Compiler as a tool, as a pair programming buddy that gives you hint what might go wrong.

Complementing the fault tolerance of the BEAM, with the compiler and static analysis of Gleam.

Helps reduces and minimize the feedback loop before going to production with an error introduced by a programmer.

Gleam tries to be a type-safe version of OTP and Erlang!

If your business logic expects something to work, don’t be defensive on it.

Assert that every step worked as expected and return as soon as possible if there is an error.

Uses topic trees, with wild-cards, can be deep as you want.

Can have anything as a payload, erlang termns, binaries etc.

Client connect to server broker (over Web Sockets), over a bridge. 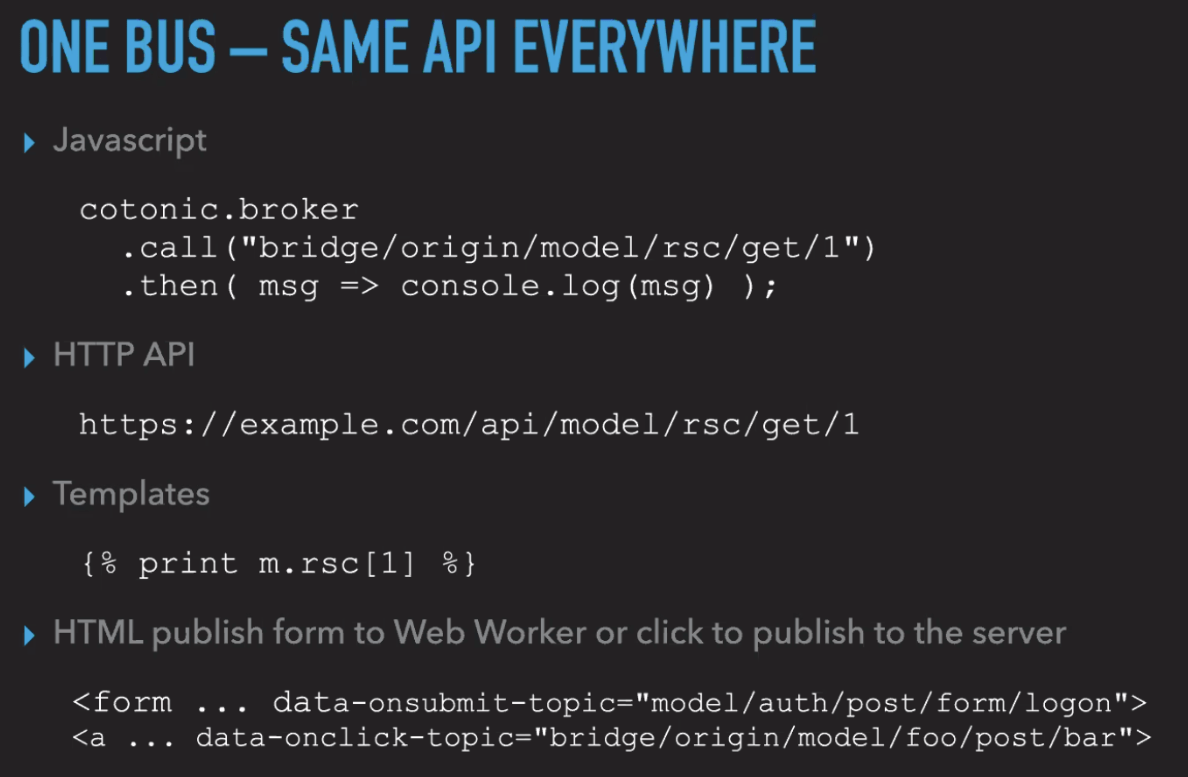 We need ACL, and not everything on the same bus.

Through a client-id and routing-id (can be seen as public IP).

Matching routing-id replies only to public and response topic.

It has a table with communication keys for each client.

The client requests a key-id.

Encryption/decryption through a key-id.

An update from the OTP team

non-profit organisation, with people from the community volunteering to grow the ecosystem.